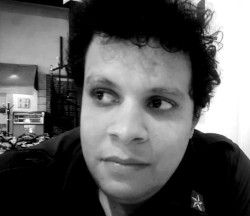 In the North they would call me ‘jestness incarnate’

In the South, ‘puddle of rain’, as heartache follows me

To the East I don’t go anymore, sadly

That leaves out the West, where spirits roam free

There’s something about the American West

That reflects my own sorrowful soul’s intent

To howl! Howl! Howl until I can’t no more

On top of the Matterhorn, and sister mounds, feral, mighty or round

On the bodegas where land marauders quench many a thirst

On a living room, quietly regrouping somewhere near Denver

On the beaches of LA

Out hunting or on a spirit trip

Out munching a burger in a parked car

Out running stark naked across the ranges

Closed behind bars in the rest of the world

On hold while driving frantically to the namesake bank

Crying it’s lungs out near a run-down bop joint

On a coyote eyeing the Moon

On a starlight neon out near the strip

Screaming out of a speeding car

Making out with someone’s girlfriend’s sister

On a roundabout near an European airport

On a wild joyride with similar friends

Then Westfold than that, until I arrive westward than you can grasp

And am just where I’d be,